Chardon school shooting survivor asks: “Why is it so hard, why can’t we do something about this?” 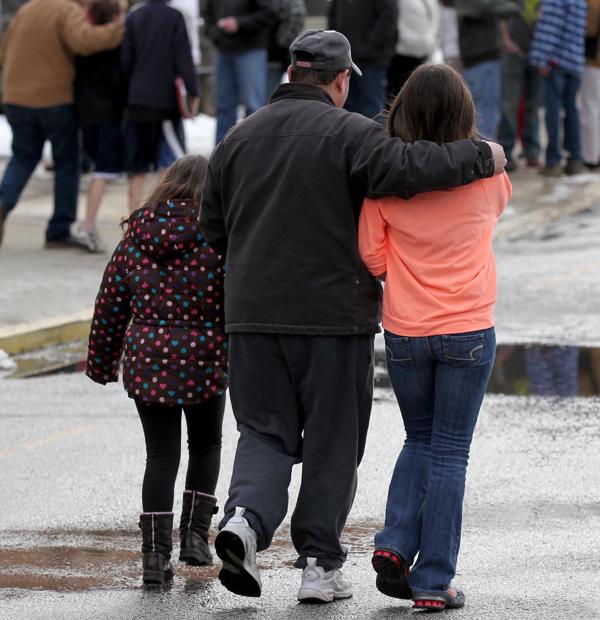 CLEVELAND, Ohio – It was early evening before Tim Armelli heard about the mass shooting Wednesday at Marjory Stoneman Douglas High School in Parkland, Florida. His wife told him about it when he walked in the door, home from another day as a health and physical education teacher at Chardon High School.

He turned on the TV. He heard “One dead, 20 injured.” He turned it off. Later, his wife had to tell him that the number was changed to 17 dead, and an unknown number injured.

For Armelli, it was a return to the horror of Feb. 27, 2012, when a skinny, deeply disturbed 17-year-old boy brought a Ruger .22-caliber semiautomatic pistol into Chardon High School’s cafeteria and started shooting. T.J. Lane killed three students and wounded three others, pleaded guilty and is serving three consecutive life terms in prison.

Frank Hall, then an assistant football coach and cafeteria monitor, chased the boy out of the cafeteria, down the halls and out of the building. Amid the mayhem, Armelli got to the school office, grabbed the P.A. microphone and began shouting “Lockdown! Lockdown!”

The shooter killed three students and injured two others by the time it was all over. But of course, it’s never all over. It keeps happening, again and again.

“Again,” Armelli said once more, his voice louder and angry.

“Why is it so hard, why can’t we do something about this?” he said. “We have done very, very little, if anything, to protect our kids. Why did this kid [the accused shooter in Florida, Nikolas Cruz] have an AR-15? That’s a semi-automatic rifle, a killing machine. Why haven’t we spent more money on mental health for our kids? Why have we not required School Resource Officers in all of our school buildings?”

Armelli is a strong advocate for School Resource Officers, or SROs. After the Chardon shooting was followed, less than a year later, by the shooting at Sandy Hook Elementary School in Newton, Conn., Armelli decided something had to be done.

“We need to find a way to turn these shootings into something positive,” Armelli said to Chardon athletic director Doug Snyder, who had spent 13 agonizing minutes on the phone with a 911 dispatcher the morning of the Chardon shooting.

They decided to form the Coach Hall Foundation, along with Andy Fetchik, the Chardon High School principal at the time, and Hall. The foundation’s mission: to provide effective means to prevent school violence.

The foundation has focused on promoting the placement of SROs — armed police officers who have received specialized training so they can interact with students and spot potential problems — in every school in the country.

Thursday, the New York Times reported that an armed SRO was in the Florida high school. “Broward County Sheriff Scott Israel said the school resource officer was on campus but did not run into Mr. Cruz,” the paper reported. “The gunman arrived during dismissal, when the campus was ‘fairly open,’ according to Robert W. Runcie, the superintendent of the Broward County Public Schools.”

Armelli said that doesn’t mean schools don’t need them. “There is nothing 100 percent you can do as a school that is going to prevent this kind of thing,” he said. “But we feel you have to do something, and the more things you put into place, the less likely this is going to happen.”

Meanwhile, each time a school shooting occurs — there have been 239 since the Sandy Hook shooting in 2012, according to the Gun Violence Archive, a nonprofit that began tracking school shootings in 2014 — Armelli relives remember Feb. 27, 2012, in Chardon.

Wednesday evening, he texted with Hall, Snyder and Fetchik.

“We ended up texting each other for a good half hour, checking in, making sure we’re all OK, venting on what should be done, what could be done.”
And sharing how they all felt about more young lives lost .