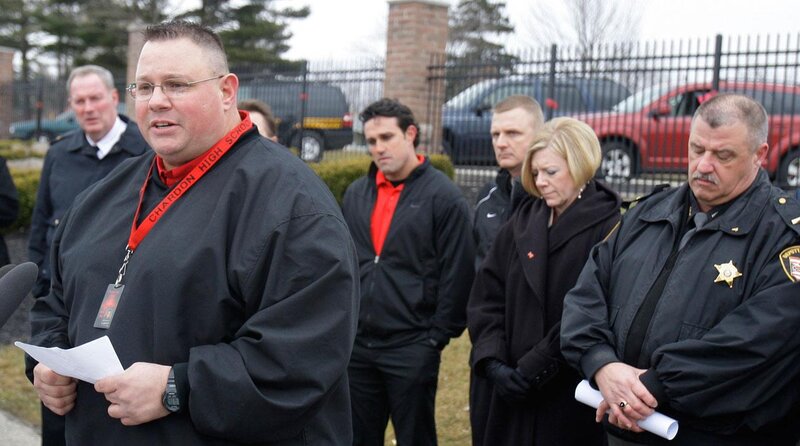 Frank Hall was in his office at Lakeside (Ohio) High, talking to a student, on the afternoon of Feb. 14, when his wife texted with the news. It had happened again, this time in Parkland, Fla. A young man with a gun. Students fleeing. A rising death toll. Another text followed, from one of the players on the football team. Coach, did you hear they had a coach that stood up for them too?

Hall felt sick to his stomach. He knew the feeling all too well.

Six years ago this week, Hall was overseeing first period study hall at Chardon High, 30 miles outside Cleveland, when he heard what sounded like firecrackers. Around him in the cafeteria, students began diving to the floor. Hall saw a 17-year-old holding a Ruger .22 semiautomatic pistol in one hand and a knife in the other. Hall’s reaction ran counter to the school’s active shooter training, as well as human instinct: Rather than take cover, the 350-pound assistant football coach and former all-state tackle charged at the shooter, roaring “Stop! Stop!” Dodging a bullet, Hall pursued him down a hallway and out to the parking lot. When the police finally caught the shooter, a mile away in the woods, the young man told them he’d run, “because Coach Hall was chasing me.” Three students died and three others were injured that day, but the toll might have been far worse if not for Hall’s actions.

Afterward, the coach was hailed as a hero, even as he struggled with guilt over the three young men who died. Oprah and Anderson Cooper called. (Hall declined.) A year later he was on the cover of Sports Illustrated, in a story written by Gary Smith. For a while, it felt like all of it might matter.

Hall relived the terrible emotions of that day as he read about Parkland and, in particular, Aaron Feis, a 37-year-old security guard and offensive line coach at Douglas High. According to witnesses, when a 19-year-old former student opened fire in the halls of the freshman building, Feis was shot while trying to shield students, likely saving lives. He passed away the next day.

Like Hall, Feis was a big man with a big heart, described as a “mentor” and “father figure” by his players. Like Hall, Feis has been called a hero. Tributes on social media. Features on Good Morning America and Anderson Cooper. As of Tuesday morning, a GoFundMe for Feis’s family had raised more than $177,000.

Hall, who has eight adopted children, was particularly impacted reading about Feis’s widow and infant daughter. “You don’t think much about process in the moment,” Hall says. “When the whole deal was done [at Chardon] I remember calling my wife and telling her I was sorry, because you don’t really think about your wife or family at the time. Coach Feis never got to make that call.”

As happens with every new mass shooting, the events in Parkland spurred in Hall a deep anger and feeling of helplessness. “It’s been six years next week and this is where we’re at?” Hall says, his voice scratchy with emotion. “It’s getting worse instead of getting better. It seems like not a lot of people are putting their head together to try to fix this.”

That’s what Hall tried to do after the Chardon shooting. Along with then-principal Andy Fetchik and health teacher Tim Armelli, he began the Coach Hall Foundation. The goal: improve safety in schools by focusing on mental health resources, security staffing and training. The foundation lobbies the Ohio legislature and Hall speaks at events: about safety measures, about preparation, about gun regulations.

Hall is hesitant to offer perspective on Parkland. Every situation is different. But some things are universal. “In the name of coach Feis and everyone who lost their lives, you have to turn it into a day that [allows you to] celebrate the memories and that you came back,” he says. “They need to turn this into a day that ultimately saves lives. They can’t let evil win.”

At Chardon, six students attempted suicide in the half year after the shootings. The principal’s secretary needed months of trauma therapy just to turn the corner where she encountered the gunman. But the students also returned to class three days later—“taking our school back,” as Hall puts it. They began to live by rules, spoken and unspoken. Never mention the shooter’s name (“never have,” says Hall, “never will”). If you see something, say something. If a kid is sitting alone at lunch, join him. Pretend you’re all on the same team.

The faculty and staff did something else, too. “The best advice we got was to let the students lead,” says Armelli. “To listen to them. They’ll tell you what they need. And it seems like the kids down in Florida are doing that. Not only leading their community, but maybe even our country.”

Indeed, Parkland students have harnessed the power of social media, first by creating a real-time record of the horrors and aftermath, then by amplifying their message and taking control of the narrative. They’ve demanded action from politicians. A national school walk-out is planned for March 14. To some, it feels like a tipping point of sorts. Hall sure hopes so. “Some day I hope and pray that one of those kids or our kids is a congressman or a senator and they’re able to change our gun laws,” he says. “I’m a gun owner. I protect my house, but it’s not an AR-15. The only purpose of that gun is to kill people. Our children see it and it’s sad that the adults in this country don’t see it. It’s sad that it’s a red and blue issue. An AR-15 isn’t the cause. But it is the means. Let’s take away the means and then work on the cause.”

A few years back, Hall returned to his old hometown to coach at Lakeside, where he’s the dean of students. Later this year, he will return to Chardon to be an assistant coach. He loves football. Loves coaching. He hates re-living what happened every time a new shooting occurs; he knows he’ll keep having to. “I just hope,” he says, “that we don’t ever become numb to it. We can’t let these kids die in vain.”